For Swedish translation of the article please go here.

For less tech savvy people or people just bored about all the details, this tl;dr; and the summary section at the end should be enough to read to get an understanding of the issues.

As mentioned, this caught my attention when I noticed that when turning off an active alarm (ARMED_HOME) using the Android app, a SMS is created similar to this (had to blur parts of it, otherwise anyone could figure out my own code by just running the scripts presented here). 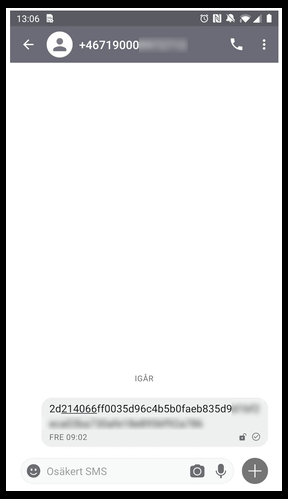 After spending the rest of the morning reverse engineering the app I could see that the 64 bytes hex string is made up of two parts. The first part is the IV, which is a random number (coming from SHA1PRNG) and the second part is the actual message.

It uses a 128-bit key, however the key used for encryption are made up of strings like this:

The message it self is encrypted using plain AES-CBC, so no integrity protection or anything. What that means is that although the SMS is encrypted anyone can still modify it without the receiver noticing that. I'll talk more about that further down in the examples about flipping bits (see the section: "Flip a bit in the encrypted message").

The format of the decrypted message is as follows:

On my GitHub page, you'll find a Python script (aaxploit.py) that I wrote as a proof of concept script. With that script you can generate valid Alert Alarm SMSes, brute force SMS to get the code to the burglar alarm and a couple of other things that I'll go more into detail separately below. Calling the script with no arguments lists all possible parameters. But to make it easier to follow along, we've put together a couple of examples below.

Generate a SMS from scratch

This creates a valid SMS message (hex string), i.e, a real usable string that can be sent as an SMS and that will either turn on or turn off the alarm. "-p" here is the code that you want to use. If you own an Alert Alarm system, then you can try this, put your own and known code after "-p" and use either "--on" or "--off" to arm or disarm the alarm. Then take the crafted SMS and send it as an SMS to the alarm unit to attack.

Added 2020-01-05: After getting feedback from other Alert Alert users, we can conclude that there is no central SMS number, instead it seems like it's main unit itself that receives the SMS directly.

Decrypt a SMS from the phone

As an example, take the crafted SMS from the example above (having that said, copy a SMS string from a phone, generated by the Alert Alarm app works just as well). In this example we already know the pin code to turn on/off the alarm, so we provide that as a parameter.

Here we pretend that we don't know the key (i.e., the pin code to turn on/off the alarm), but we somehow have gotten hold of the encrypted SMS. By running the brute force attack we try to find the correct key and pin to turn on/off the alarm. Due to the nature of how the message is encoded, this always seems to work and since the key space is very small, it finds the key/pin in less than a second.

As we can see, we found the correct key/pin code! Note that the pin code is the same as used on the real physical burglar alarm at the alarm owners house. I.e., if a thief breaks in, he can enter this pin code and the alarm never goes off.

Flip a bit in the encrypted message

Since AES-CBC is malleable, we can flip a bit in the IV which will be directly reflected on the decrypted message. I.e., a man in the middle can use this to either change a message from "Turn on alarm" to a "Turn off alarm" or vice versa. Notice that here one doesn't even have to decrypt the message, i.e, by just taking the original message and flip a bit and use the modified SMS is enough to turn off (or turn on) the alarm. In the example below we flip the meaning of the "i" bit.

If we take the "Modified SMS" and decrypt it, we can see that the "i" field has been changed (from "0" to "1", compare with message above, see the section "Decrypt a SMS from the phone").

Note that bit-flipping can be done to anything in the data, i.e., it would probably work to trick the system by taking an old valid SMS created by the Alert Alarm app and then just flip the date and/or hour bits and resend the modified SMS.

Why did Alert Alarm decide to use SMS from the app, when there already must be a data connection with the app? This means that it probably works something like this.

Why on earth use SMS at all? Doesn't all mobile phone / users have a data connection in 2019?

Questions and statements on forums etc

Added 2020-01-05: After going public with this people have started asking questions directly to me and in forums etc, I will try to give my view and answers to some of it here.

The security of the solution relies on

In fact, one can argue that the security only relies on "3", since if one gets hold of "3", then it's trivial to figure out "1", that is basically what the script aaxploit.py does. "2" on the other hand is typically available in phone books etc, i.e., it's usually not hard to figure out the phone numbers to the owner of a house.

Alert Alarm seems to have tried to "lock" the SMS service to a set of users. i.e., the first user have to add additional phone numbers before these people can use the app. So at first glance, one might believe that it's only the owners of these phone numbers who can send the SMS. But the fact is that there are many services out there that allow you to send spoofed SMS so it looks like they were sent from a certain phone number. I.e., it's totally possible to craft a SMS using aaxploit.py and then use one of these services to send a rouge SMS. I.e., any user can turn off the alarm without the alarm owner knowing about it.

Should the owners of this alarm be worried? Getting an SMS from the home owner is probably a bit challenging, so it's probably a bit hard to actually do the attack (don't leave your phone unattended!). On the other hand if Alert Alarm doesn't notice brute force attacks on the receiving side of the SMS, then it's fairly easy to put this attack into practice.

No matter, the flaws identified are quite severe and gives an attacker several ways to attack the system. Attacks that shouldn't be possible to do that easy on a system meant to protect our homes. Me and the other customers of Alert Alarm don't want our burglar alarms to have these kind of weaknesses. Right now it's more Security by Obscurity than real security.

I'm Joakim Bech, a guy who has been working with Security on embedded devices for the last 12 years. I did the work above on my spare time, but otherwise I head the security team at a company called Linaro where I've been working for a little bit more than 6 years.